Beginners, full-time programmers or hobby coders: These apps are perfect for developers and those who want to become one. For learning, writing or pushing code.

Be it on Youtube or on one of thousands of websites: There are countless tutorials and webinars on the Internet. Also for programming. But you can’t really integrate them all into everyday life. The following apps will help you develop every day.

Learn to program and train 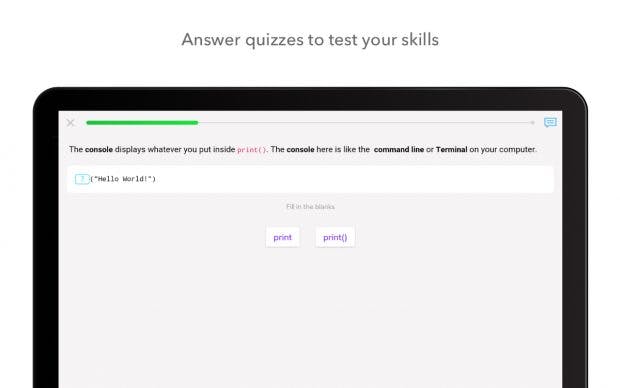 Py has free courses for Swift, Python, JavaScript, HTML, CSS, and more. In the app you have to write small programs yourself or solve puzzles. If you have successfully completed a course, points are awarded and you gradually reach higher levels. This increases motivation and is perfect for beginners. Py is available for Android and iOS . 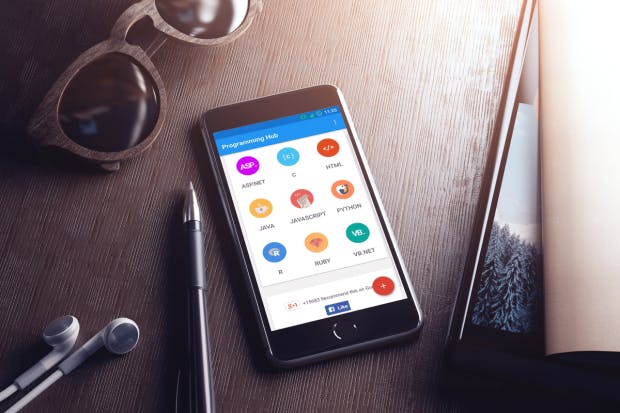 The Android app Programming Hub has not received several awards for nothing. Including “Editor’s Choice” and “Best of the Best 2017” from Google Play. The reasons for this include over 5,000 code examples, over 20 courses and a compiler that is also integrated in the app. In addition to Java, C ++, JavaScript, HTML, Python and Swift, you can learn ten other programming languages ​​with the app. The app is also available in German. 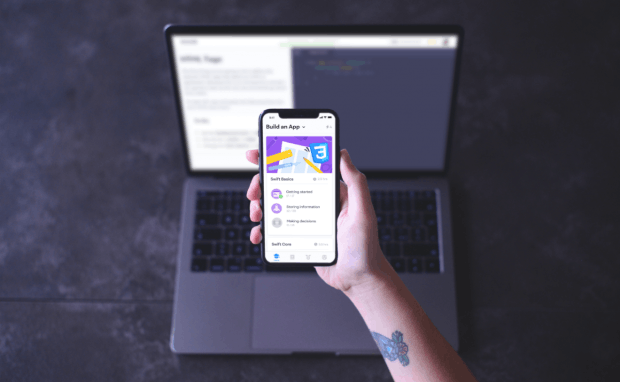 Another excellent app is Mimo from a Viennese company. At the beginning, among other things, you will be asked about your learning goal: developing projects such as apps or websites, learning a programming language or advancing your career. You have to further specify your learning goal. Available projects are websites, games, apps or hacking. At the end of the setup, the app creates a personal learning plan based on the selection. Another special feature is the availability of a web app. In addition to the free basic mode, in which you are very limited, there is a premium model that can be concluded annually or monthly. Depending on which you pay 4.99 euros or 9.99 euros per month. The app is currently only available in English.

Code editors for your pocket

Got an idea in the subway and want to quickly write a few lines of code? Or have you got the Smart Keyboard for your iPad and would like to program with it? This is not a problem as there are mobile code editors themselves. Here are a few good examples.

Droidedit is a compact and initially free app for Android devices. Syntax highlighting is supported for almost all major languages: from Java to Python, from C to JavaScript. HTML is also possible – even with a preview in the browser. The affordable Pro version even includes FTP and SFTP. 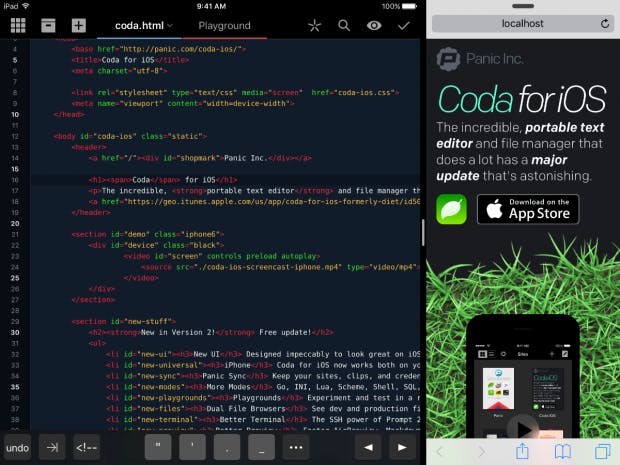 In addition to a desktop version for the Mac, Coda also has an iOS app . Even if the app is relatively expensive at just under 28 US dollars, many features are promised. Including support for many programming languages ​​as well as SFTP, FTP, Amazon S3 and more. In addition to an SSH terminal, there is also a preview for your code. In combination with a Mac, you can call up a preview of what you are developing on the laptop on your iOS device. The app convinces numerous users and despite the higher price, it received a rating of 4.7 in the app store (as of March 2019). 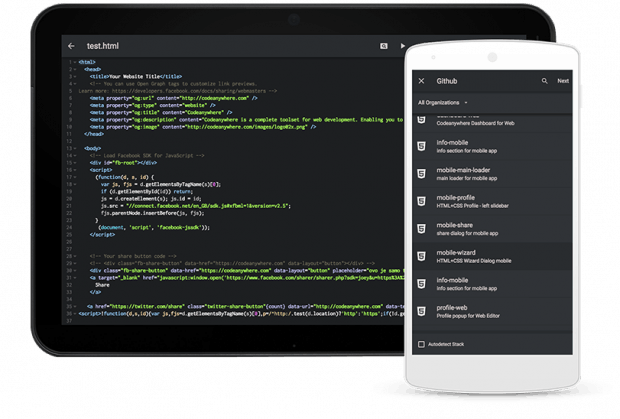 Codeanywhere is available as a web app and for the iOS and Android systems. (Graphic: Codeanywhere)

The mobile IDE Codeanywhere comes with a wide range of functions for iOS and Android at no cost. In addition to the code editor, there is also an SSH terminal and support for Git. Syntax highlighting is possible for over 100 programming languages ​​and auto-completion is also available, at least for some important languages. This includes HTML, XML, CSS, JavaScript, Python and PHP. A connection with Dropbox, Onedrive, Google Drive and others is also possible. An FTP and SFTP client is also on board. However, the app struggles with numerous problems on iOS and has accordingly received poor ratings. 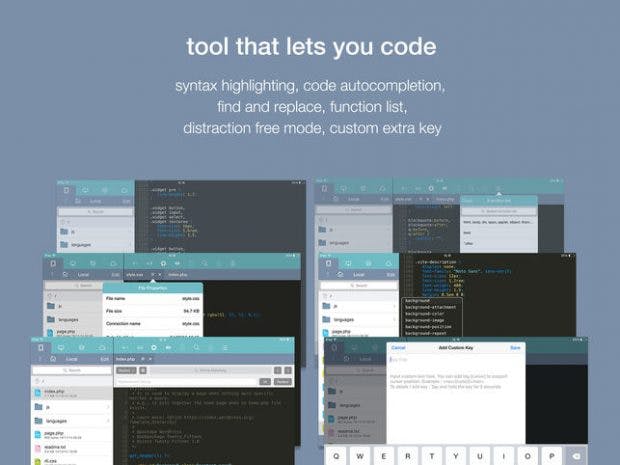 The much better Koder app is recommended as a free alternative to Codeanywhere on iOS . In addition to numerous typical features such as syntax highlighting of over 80 languages, an SSH client, FTP and SFTP support and a version for the iPad that also supports multitasking, Koder Codeanywhere is in no way inferior on paper. The app can also edit files from the next app in the list – the Git client Working Copy – using drag and drop.

Other popular code editors at a glance:

Really good Git clients are unfortunately rare for smartphones. Apple users can therefore count themselves lucky that with  Working Copy they can use a really good and also (for the most part) free app. However, in order to activate features like pushing a commit, a purchase must be made in the app. 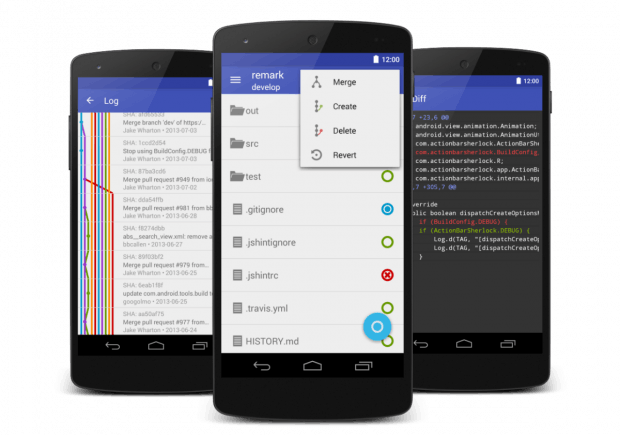 Especially with Android, the selection of Git clients is pretty rare. The best alternative is probably the paid app  Pocket Git . It comes with a clean interface and offers all the important features you need to quickly make small changes to the repository or to view the latest commit of your colleague.

Terminus: An SSH and Telnet client with bash 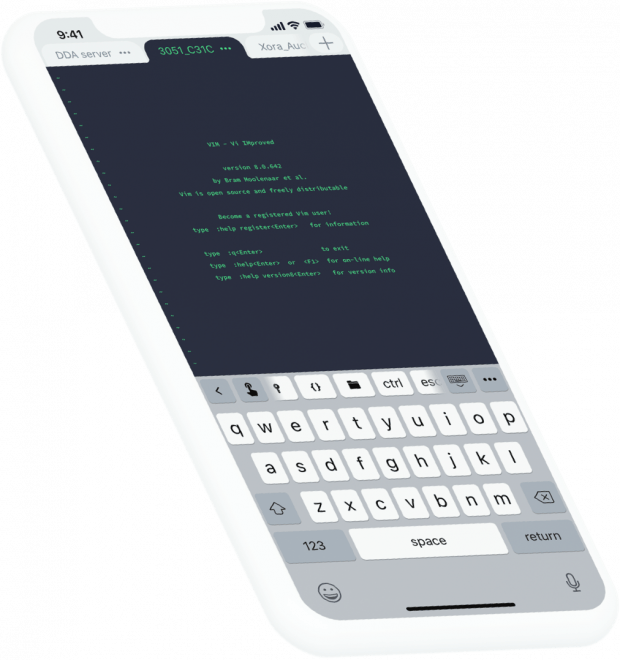 Terminus is an SSH and Telnet client for Android and iOS – the putty for smartphones, so to speak. The app offers the most important features free of charge. Including the local Unix shell Bash or a desktop version for Windows, Mac and Linux. However, some pro features cost around $ 30 annually. This enables tabs in the terminal, fingerprint protection, an SFTP client or synchronization between multiple devices, for example. 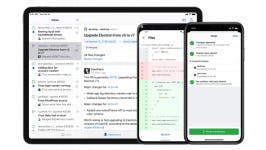 GitHub Mobile is of course the most obvious solution for interacting with GitHub while on the go. Announced at the GitHub Universe developer conference last year , the official GitHub app for Android , iOS and ipadOS has been available since March. Developers can use it to comment on, check and edit code on their mobile devices – regardless of whether they are smartphones or tablets – and react to feedback and problem reports. The app synchronizes with the website so that developers can seamlessly continue the work they have started on the mobile device on the website. GitHub wants the app to be understood as an extension of the website.

But external providers also offer apps for accessing your GitHub profiles and repositories. One example would be GitPoint, a free, openly licensed app built with React Native with a solid user interface for Android and iOS . Via GitPoint you can access your GitHub profile and manage notifications, issues and pull requests. GitHawk is another option for iOS and ipadOS with a similar range of functions, which, similar to GitHub Mobile, even offers emoji reactions. Apple users who can manage GitHub issues via a mobile app could take a look at GitShot throw, the app is available for 6.99 euros for iOS and ipadOS. If you like it even more reduced and just want a ping for new notifications, Brigitte is the right companion.

There are also apps for BitBucket and GitLab users to manage your projects on the go. For example GitLabControl for iOS and ipadOS. For BitBucket users, BitBasket for Android and iOS / ipadOS remains an option, but the app does not appear to be recommended in view of the 1 and 2 star ratings.