The Nvidia Shield TV has often been a topic in the blog, in our team, for example, André and I rely on the Android TV solution, among other things. Nvidia is now announcing software update number 25 for the platform – and not omitting the first Shield, which appeared in 2015.

According to Nvidia, one of the favorite features of the users of the new Shield is the AI ​​upscaler. It works by training a neural network model on countless images. In short: Bad pictures should be turned into good ones, which worked sometimes more, sometimes less well in my test. This is now being expanded a little further on the new 2019 models.

Today’s upgrade includes support for UHD 4K upscaling from 360p to 1440p content. And for the 2019 Shield TV Pro, support for 60fps content has been added. Now the Shield can upscale live sports on HD TV and HD video from YouTube to 4K using AI. In the coming weeks, after an update of the Nvidia game app in September, 4K upscaling with 60 frames per second will be added to GeForce Now.

The customizable menu button on the new Shield remote is another addition to the family. She now receives two more customization actions. In addition to an action associated with a single press, users can now configure a custom double press and long press action. 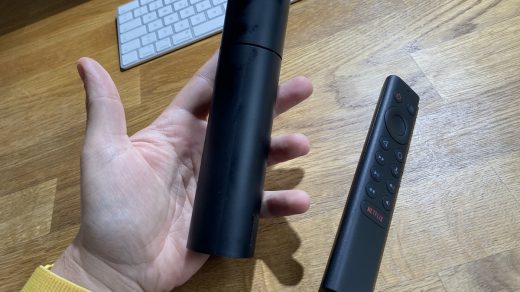 With the latest software upgrade, the support for the IR and CEC volume control is also improved. According to Nvidia, these upgrades include support for digital projectors and enable functionality when the console is not active. In addition, the IR volume control is added when users use the Shield TV app and when Google Home is connected to the Shield. The 2019 version remote adds an IR control to change the input source on TVs, AVRs and soundbars.

In addition, previous generations – both 2015 and 2017 models – now have an option to adjust the frame rate of the content displayed. And finally: SMB3 is now natively supported, which allows secure and faster connections – and SMB version 3 now also works without a Plex media server.