LULW is a FrankerFaceZ extension Twitch emote featuring a picture of video game reviewer John Bain, better known by his online handle TotalBiscuit. The emote is a cropped and rotated variation of the LUL Twitch emote.

On June 23rd, 2013, Flickr user itsjustatank posted a photograph of video game reviewer John “TotalBiscuit” Bain laughing at the Major League Gaming Anaheim 2013 (shown below, left).[1] In 2014, Bain used a cropped version of the photograph as “cynicallaugh” emote available to subscribers of his Twitch channel. In 2016, the emoji was added to the BetterTTV Twitch extension as LUL (shown below, right),[2] and on September 1st, 2017, a redrawn version of the photograph was added to Twitch as an official emoji.[3] 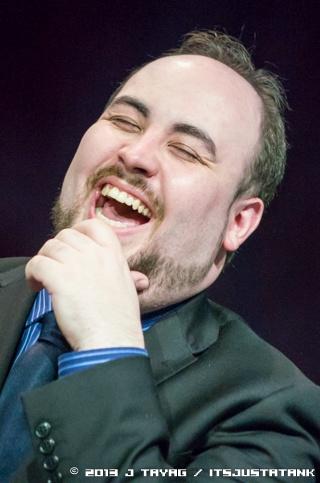 On November 2nd, 2016, FrankerFaceZ user Ian678 posted a cropped and rotated version of the BTTV LUL emoji as LULW (shown below).[4] The emoji was later updated on November 8th, 2016.

In three years, over 32,700 Twitch channels enabled the emoji, with LULW becoming a popular way of expressing laughter on the streaming platform. Additionally, the emoji has seen use outside of Twitch as a slang expression conveying laughter, primarily on Twitter and Discord.

LOLW refers to a variation of LULW in which the emote is combined with the Face With Tears of Joy emoji.[5] First added to FrankerFaceZ Twitch extension on July 4th, 2019, the emote was enabled by over 400 streamers in two months.[6]