The Photoshop Camera smartphone app for iOS and Android, announced last November, is now available. Adobe’s Marketing is positioning the free camera app functionally as an alternative to the main camera.

Photoactive social media enthusiasts should be interested in the latest app from Adobe . With Photoshop Camera * , which the image processing specialist makes available for both Android and iOS, Adobe joins the various providers of photo apps with live filters and effects.

Photoshop Camera is an app that – like many others – can apply live filters and effects to existing photos in your gallery. It is also possible to select the effects before pressing the shutter release and see the potential end result through the viewfinder. This can potentially save Instagramers time. It may also help with the choice of perspective if the final effect filter can be assessed well in advance. 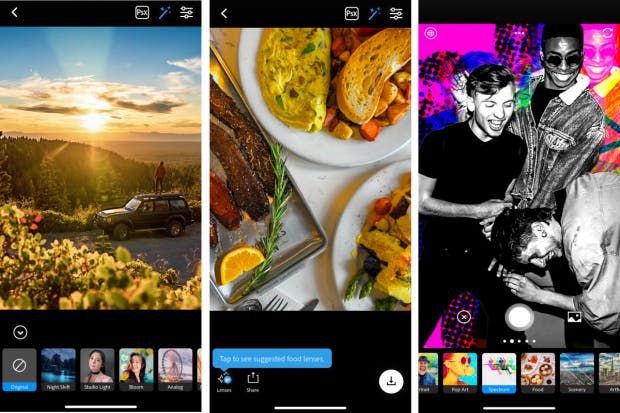 According to Adobe, Photoshop Camera uses the in-house AI Sensei to sensibly place the live effects or to improve the recordings in general. Contrary to what the advertising suggests, the effects are not automatically applied to images, for example in the style of an intelligent automatic. Rather, the live filters and effects sit in a classic row under the shutter button and wait to be selected by the user.

Adobe calls the effect filters lenses. In principle, anyone can develop such lenses. To get started, Adobe developed some weird effects in collaboration with artist Billie Eilish. There are also effects with more or less descriptive names such as portrait, pop art, spectrum, food, landscape, blue sky or daydream, each of which comes in several variants. The stock of so-called lenses is expected to increase week by week. 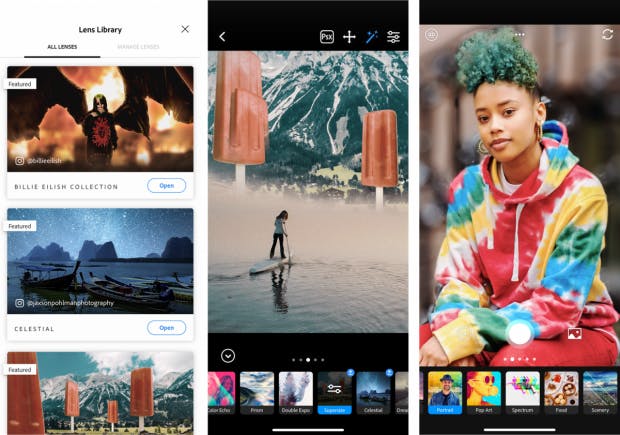 First tests: The oho effect does not occur, but the app is always useful

In the first attempts we were able to find that the AI ​​can actually produce good results with the live application of the supplied effects. You can fine-tune the respective lenses by individually improving the determining parameters such as exposure, shadows, sharpness of detail. Unfortunately, Photoshop Camera only offers a very imprecise scale that is controlled by swiping across the entire screen and hardly allows filigree gradations.

In the end, Photoshop Camera is just one effect filter app among many – there are dozens of similar apps, especially for iOS. Advantages of Adobe’s app are that it is free and does not have any major weaknesses compared to the competition. You need an Adobe ID to use it. But it’s free.

The pictures will be saved in your photo gallery on the device. If you want, you can rent 20 gigabytes of storage space in the Creative Cloud via in-app purchase. That costs 1.99 euros a month. If you want to use the free Google Photos to back up the photos from Photoshop Camera, you have to remember to add the folder of the same name in the settings for backup and sync.

Small downer for Android users: the app does not work with all smartphones. Therefore, you may not find them in the Play Store from your devices. From our test pool, for example, the Xiaomi devices and the pixels from Google refuse to work. Oneplus smartphones, on the other hand, find the app.